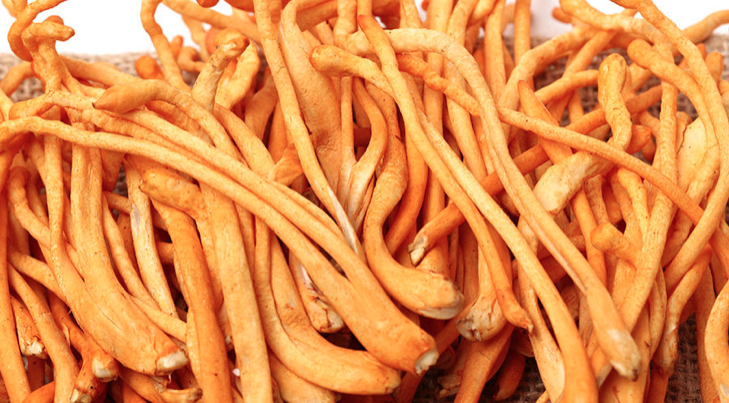 Cordyceps is an interesting exotic fungus that grows on caterpillars living in the high mountain regions of China and Tibet ( in the U.S., all cordyceps is laboratory grown ). It is parasitic and eventually consumes most of the caterpillar.

It has a long history of use in Traditional Chinese Medicine (TCM), as well as Tibetan medicine. The name cordyceps comes from Latin words meaning club and head.

Cordyceps is an adaptogen that supports both immune and endocrine health. Cordyceps’ diverse actions appear to support communication between the adrenals and the immune system, and you will find cordyceps incorporated into both adrenal and immune formulas.

Scientific research has uncovered that there are many active compounds found in cordyceps including polysaccharides, cordycepin, cordycepic acid, nucleosides, ergosterol, and adenosine.

Much research has looked at the immune-supporting effects of cordyceps. In fact, a 2019 randomized, double-blind trial published in BMC
Complementary and Alternative Medicine showed that after eight weeks, cordyceps supported natural killer cell activity significantly more than placebo.

Components of cordyceps, such as adenosine in particular, may be partly responsible for supporting energy transfer and cellular signaling.

A 2017 review published in the journal Experimental & Molecular Medicine that focused on muscle fatigue, listed cordyceps as a natural substance to support muscle energy. Specifically regarding muscle function, cordyceps has been shown to support glycogen stores and blood lactic acid.

Because cordyceps is a potent antioxidant, this too is another way it supports immune function,  adrenal function and energy levels.

Cordyceps is available as a dietary supplement and is often combined with other adaptogenic botanicals and nutrients that support energy and adrenal function.  The amount typically recommended is 1,000 to 3,000 mg per day(note: this a minimal maintenance dose; therapeutically, I would recommend 5ooo mg- 1level tsp- 2 x daily).

The long history of use of cordyceps in TCM indicates that it also has a strong safety record.

(For more information and to order, go to Shop in the menu bar, click on medicinal mushrooms, then click on Cordyceps. Regarding the virus, I recommend Cordyceps, Turkey Tail, and Chaga. Mix together and take 1 tps, 2 x daily. If you go to the grocery store, etc., take a dose upon returning home. If you are getting ill, take 1 tsp, 4-6 times daily. In simple times, One of my favorite constitutional combinations is: 150 gms Reishi, 150 gms Chaga, 150 gms Cordyceps. Combine together. Take 1 tsp, 2 x daily.)