Dian Hong: During third century BC, the central area of Yunnan, around present day Kunming (major city), was known as ‘Dian’. Often Yunnan black teas are referred to as Dian Hong teas.

Yunnan Black Teas: Yunnan black teas vary in their flavor and appearance. Some grades have more golden buds and a very sweet and gentle aroma without astringency. Others make a darker, brown brew that is bright, uplifting and slightly sharp.

The ‘Nilgiris’ or ‘Blue Mountains’: These are a range of mountains in the South Indian states of Tamil Nadu and Kerala. Tea culture is eminent in these serene mountains. Tea is grown at elevations of 1,000 to 2,500 meters . The landscape is quite unlike the rest of India, marked by rolling hills covered with dense vegetation and tea gardens. Many portions of the hills are preserved as natural reserve forests.

Assam: This region is the largest tea-producing region in the world and home to some of the best black teas from India. It lies 120 miles East of Darjeeling (a high elevation tea growing area), and borders with China, Burma, and Bangladesh. Assam black teas often undergo special processing to bring out their full-bodied, rich undertones.

Darjeeling: Tea-making in Darjeeling has distinct seasons, with early plucking beginning in late March. After a brief period, the second plucking ‘Second Flush’ generally occurs in late April. Teas are also made after the rains in summer, and these ‘Autumnal’ tea are gaining more popularity. 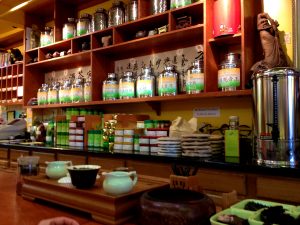 In Sri Lanka, the lush tea country is divided by a chain of mountains which form the climatic divide of the island into a Western and Eastern region.

On the Eastern side is the Uva region, while the Dimbulla region lies on the Western side, each producing tea renowned for their distinct character and flavour.

CEYLON (Sri Lanka) ORANGE PEKOE: Orange Pekoe is one of the most loved terms in the tea trade. Contrary to popular belief, it has nothing to do with the color or flavor orange. Orange Pekoe is the basis of grading tea leaves according to their size and position on the tea branch. This grading system is used especially in the countries of India, Sri Lanka, Bangladesh, Vietnam, Indonesia.

Hà Giang is a province in northeastern Vietnam. It is located in the far north of the country, and contains Vietnam’s northernmost point. It shares a 270 km long border with Yunnan province of southern China. Hence it is known as the final frontier of Vietnam. Hà Giang has many high rocky mountains (lime stone formations) and springs; the important mountains are the Cam and Mo Neo. The major rivers of the region are the Lo River (Ha Giang town is located on its left bank) and Mien River.