CES (Cranial Electrotherapy Stimulation) is an effective non-drug therapy, delivered via a small battery operated device. For more than 40 years, numerous countries around the world have utilized this therapy.

This device is effective in settling down an over-active Limbic System. It  works by balancing neurotransmitters, utilizing gentle micro-current pulses at a frequency of 100hz. Often one’s condition involves an imbalance of neurotransmitters (serotonin, dopamine, etc).

With CES, you will usually experience positive changes within a week or so of continuous use. Some users may even notice immediate improvements.

Neural networks of the Limbic System function in harmony with other brain structures. Together, they control a variety of physiological and psychological functions.

These functions are inclusive of emotion, behavior, motivation, memory formation, sleep (dreaming), appetite, and so on.

A dysfunctional Limbic System can be responsible for many clinical manifestations, such as anxiety disorder, stress, insomnia, and depression.

Below, you will find a brief introduction to parts of the brain and their function, 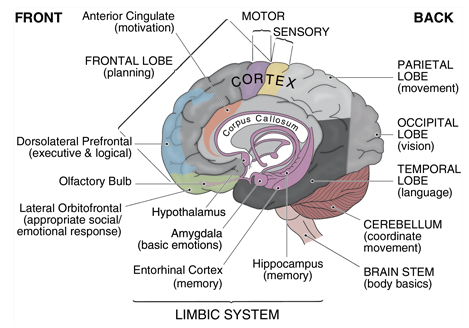 AMYGDALA:
Lying deep in the center of the Limbic emotional brain, this powerful structure is the size and shape of an almond. It is constantly alert to the needs of basic survival including sex, emotional reactions such as anger and fear.

Consequently, it inspires aversive cues, such as sweaty palms, and has recently been associated with a range of mental conditions including depression to even autism. It is larger in male brains, often enlarged in the brains of sociopaths and it shrinks in the elderly.

BRAIN STEM:
The part of the brain that connects to the spinal cord. The brain stem controls functions basic to the survival of all animals, such as heart rate, breathing, digesting foods, and sleeping.

It is the lowest, most primitive area of the human brain.

CEREBELLUM:
Two peach-size mounds of folded tissue located at the top of the brain stem, the cerebellum is the guru of skilled, coordinated movement (e.g., returning a tennis serve or throwing a slider down and in) and is involved in some learning pathways.

CEREBRUM:
This is the largest brain structure in humans and accounts for about two-thirds of the brain’s mass. It is divided into two sides — the left and right hemispheres—that are separated by a deep groove down the center from the back of the brain to the forehead.

These two halves are connected by long neuron branches called the corpus callosum which is relatively larger in women’s brains than in men’s. The cerebrum is positioned over and around most other brain structures, and its four lobes are specialized by function but are richly connected.

The outer 3 millimeters of “gray matter” is the cerebral cortex which consists of closely packed neurons that control most of our body functions, including the mysterious state of consciousness, the senses, the body’s motor skills, reasoning and language.

The Frontal Lobe:
is the most recently-evolved part of the brain and the last to develop in young adulthood. It’s dorso-lateral prefrontal circuit is the brain’s top executive.

The Temporal Lobe:
controls memory storage area, emotion, hearing, and, on the left side, language.

The Parietal Lobe:
receives and processes sensory information from the body including calculating location and speed of objects.

The Occipital Lobe:
processes visual data and routes it to other parts of the brain for identification and storage.

HIPPOCAMPUS:
located deep within the brain, it processes new memories for long-term storage.

If you didn’t have it, you couldn’t live in the present, you’d be stuck in the past of old memories.

It is among the first functions to falter in Alzheimer’s

HYPOTHALAMUS:
Located at the base of the brain where signals from the brain and the body’s hormonal system interact, the hypothalamus maintains the body’s status quo.

It monitors numerous bodily functions such as blood pressure and body temperature, as well as controlling body weight and appetite.

THALAMUS:
Located at the top of the brain stem, the thalamus acts as a two-way relay station, sorting, processing, and directing signals from the spinal cord and mid-brain structures up to the cerebrum, and, conversely, from the cerebrum down the spinal cord to the nervous system.