The native home for Oolong tea is Anxi county in Fujian, China and Nantou county in central Taiwan. The island of Taiwan is located off the coast of mainland China in the Pacific Ocean. It is also known by its Portuguese name of Ilha Formosa, which means “beautiful island.” 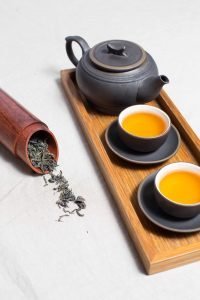 The varietals growing on Mainland China and Taiwan vary significantly and provide a universe of flavors to savor and enjoy. Particularly enjoyable, are the intricate tea utensils used to brew Oolong teas.

Traditional oolong plant varietals and processing methods are native to Taiwan and Fujian province of China. Only recently has this art begun to be better understood in the Indian sub-continent. Although there are several plant varietals growing in Kurseong, in making Kali Cha, a Chinese tea plant varietal was used.

Oolong seasons are primarily spring, fall and winter. Based on the type of oolong being made, either newly sprouted leaves or mature ones are plucked.

The leaves undergo a ‘withering’ or ‘moisture reduction’ process, making them more conducive for rolling. Dependent on the weather, the withering either happens outdoors, or in climate controlled indoors. Bamboo drying racks are also used in the process.

The leaves can also undergo a ‘bruising’ using either bamboo rollers or gentle machines, both facilitating a oxidation process. The leaves are then rolled in cloth and with precise rolling motions, they are shaped into a ‘pearl’ shape. Hand rolling is an ‘old style’ and used in selected areas today.

Rolling machines, like the one above are used primarily for ‘sideways’ twisted oolongs.

A tunnel roaster is used to bake the leaf. There are several iterations between cloth ball rolling and roasting of the leaf. The process is done until full flavor develops in the leaf.