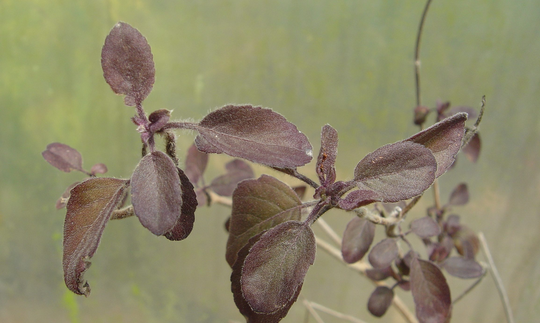 With words like “god”, “goddess”, “king”, “queen”, “diety”, “holy”, and “divine” often seen in texts describing Tulsi, you know the plant is bound to have a special history.

Used in Indian culture as a religious, spiritual, and healing herb for more than 5,000 years, Tulsi (or Holy Basil) is newer to western culture and is often found as an ingredient in herbal medicines, tinctures, and essential oils.

Dried Tulsi leaves can also be steeped to create an invigorating herbal tea. So exactly how did this revered herb end up in our teacups?

Also Known as Holy Basil (Ocimum Sanctum), Tulsi is a sacred plant from India used in traditional Ayurvedic medicine. Tulsi is considered an ‘elixir of life’ that provides alchemy to one’s well being.

The plant is said to promote longevity, for it contains many beneficial compounds known as phytochemicals, and has strong anti-oxidant, anti-bacterial, anti-viral, and immune system enhancing properties.

Tulsi is an adaptogen, meaning it helps the body adapt to stress and anxiety. The Tulsi plant has been used for thousands of years in Ayurveda, a form of traditional Indian medicine. The herb is used in many forms—fresh, dried, powdered, herbal tea, essential oil—as an Ayurvedic remedy for a variety of common ailments.

Tulsi is part of the Lamiaceae family of aromatic flowering herbs that also contains mint, sage, oregano, rosemary, and lavender.

Tulsi is native to the Indian subcontinent and flourishes in humid, tropical climates. It is widely grown and cultivated throughout the Southeast Asian tropics.

It grows as an erect branched shrub that reaches up to 60cm tall and boasts furry stems, fragrant purple or green leaves, and small white to purplish flowers that shoot out the tip of the branches. Its leaves are cultivated, picked, and dried for use in herbal tea applications.

There are three major varieties of the tulsi plant, each with different characteristics:

KRISHNA: Known as purple leaf Tulsi for its most marked characteristic of purple leaves and blossoms, this plant has the spicy aroma of cloves with cinnamon undertones and its leaves mimic the sharp, crisp flavors of pepper. It’s widely grown across India and is often found decorating private homes and gardens. Tulsi is caffeine-free.

RAMA: Boasting green leaves and white or light purple flowers, this green leaf Tulsi is known for its clove-like aroma. It has a more cooling and mellow flavor than purple leaf tulsi. It’s grown across India but can also be found in China, Nepal, Bengal, and Brazil.

VANA: This wild leaf Tulsi is indigenous to Asia and parts of Africa. It can be found growing wild as well as cultivated in the Himalayas and across the plains of India. Wild Forest Tulsi (Vana Tulsi ) is considered the most flavorful and also hardest to grow. The plant boasts light green leaves and has more of a refreshing citrus aroma and flavor than its spicy cousins.

As a plant with religious and spiritual significance, Tulsi has a rich history of legends to explain how it came to be and why it is worshiped.

Another legend relates Tulsi to the Samudra Manthana, the churning of the cosmic ocean by the gods and demons. At the end of the churning battle, Dhanvantari, the physician to the gods, rises victorious from the ocean with the elixir of immortality and offers it to the gods. The Hindu god Vishnu sheds happy tears for the gift, the first of which fell into the elixir and sprouted the Tulsi plant.

Yet another legend regards the Tulsi plant as a threshold point between heaven and earth. A traditional prayer tells that the creator-god Brahma resides in its branches, all Hindu pilgrimage centers reside in its roots, the Ganges River flows through its roots, all deities in its stem leaves, and the Hindu scriptures in the upper part of its branches.