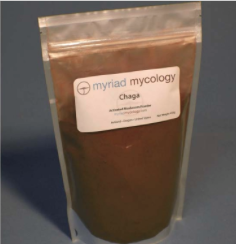 Chaga contains a fascinating variety of active constituents including betulin, various polysaccarides, triterpenes, and betulinic acid, concentrated from the birch trees in which it grows.

Historically, Chaga was  used in traditional Russian and Polish medicine as an adaptogen,

pain-reliever, and folk remedy against cancer.

It is currently being used in numerous cancer studies. It is also being studied for its ability to treat the virus HIV.

Further still, Chaga is also extremely high in antioxidants having the highest ORAC value, over 40,000, for any fruit, vegetable or mushroom tested so far. A popular and favored medicinal mushroom.