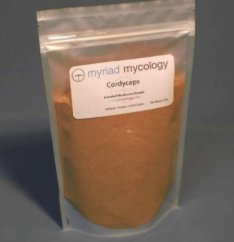 This famous medicinal mushroom is the most expensive herb in the world fetching the price of as much as $14000/kilogram in some cases.

Cordyceps Sinensis is endemic to the Tibetan Plateau and in some cases wild crafting this one species provides natives with 80% of their annual income.

Used by numerous cultures, including Tibetans, to increase virility, endurance, energy, and alertness. As it has properties similar to Ginseng, Cordyceps is being used to strengthen and rebuild the body after exhaustion or long-term illness.

Traditionally, it is used for impotence, neurasthenia, and backache. A very interesting usage, in light of today’s problems of opioid addiction, is it’s use as an antidote for “opium poisoning“(Uphof, 1968).

Many athletes have turned to Cordyceps due to it’s ability to increase oxygen uptake and aerobic capacity.

Our Cordyceps supplements are composed of the most highly researched Cordyceps strain CS-4: utilized in nearly half of all medical research done to date about Cordyceps. Cordyceps is also renown for its use as an aphrodisiac and sexual tonic. *