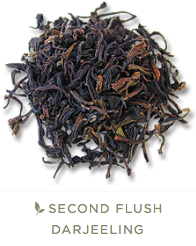 Second Flush refers to the plucking season of May through June.

The flavor is stronger, and as such, second flush teas are sometimes preferred over first flush teas by hearty and full body tea lovers. Very distinct muscatel aroma.

Tea making in Darjeeling has distinct seasons, with early plucking beginning in late March. After a brief period the second plucking ‘Second Flush’ generally occurs in late April, May, and June. Teas are also made after the rains in summer and ‘Autumnal’ tea are gaining more popularity. The flavors vary with the season and are dependent on the climate and processing technique.